A Commitment to STEM Education at a Top Everett Private School 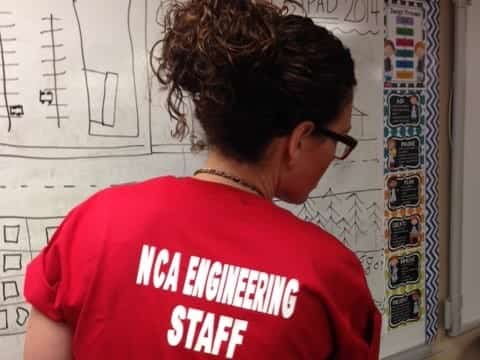 Raine Sherwood is not your average teacher. As a specialist educator at Northshore Christian Academy (NCA), she leads many STEM education programs, including our highly respected engineering program. She is currently in the process of setting up a new AR/VR classroom and leading the garden club.

Raine was the one to originally bring engineering to NCA through Project Lead the Way. From there, she expanded it from a homeroom component into a specialist class to give students more depth in the subject matter. Raine also previously coached Robogators, an award-winning robotics team.

She recently won the University of Washington’s “Extra Yard for Teachers” award for excellence in STEM (Science, Technology, Engineering, and Mathematics) education. We are extremely thankful to have Raine on our team and excited to see what she does next!

Raine Sherwood isn’t just a teacher, she is a STEM education leader here in Everett. Her initiatives have played a significant part in making Northshore Christian Academy what it is today: A leading private school that produces passionate students who excel in engineering and tech.

We spoke to Raine about what makes NCA’s STEM programs unique. 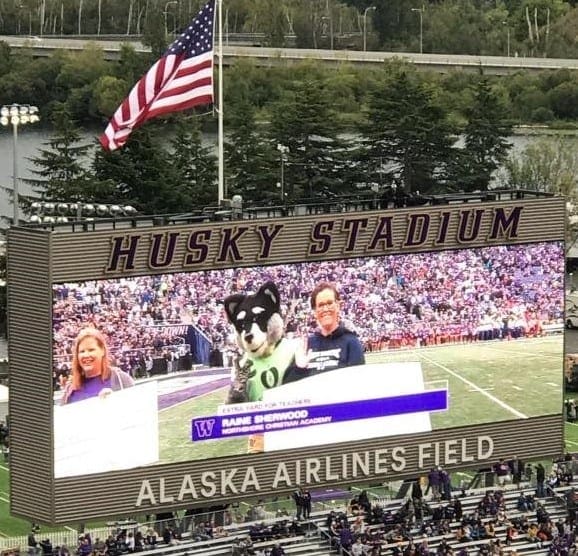 What makes you so passionate about STEM education programs?

STEM is where the job market is going. There are so many different jobs that require these skills. It’s not just building airplanes or building cars, it’s computers, it’s designing, and working with materials.

These kids are going to be designing, building, or working with the next big thing. And the more hands-on education we can get them, the more successful I believe they’ll be.

We heard you were starting an augmented and virtual reality program. Can you tell us about that?

Google came out and did a beta test with us on Google expeditions, and it was fascinating. Augmented reality allows the kids to experience something that looks real on a screen. For example, we looked at tornadoes. The kids can go on top of the tornado, under the tornado, around it, and see how it affects a little landscape around it.

Virtual reality allows us to go to different places. In one of my classes, we talk about all the different buildings around the world. Using the VR allows us to actually go there and see the Burj Khalifa and experience what it’s like to be on the top floor. It brings learning to life. I’m really excited to use it.

Tell us about NCA’s engineering program.

Our engineering program starts in kindergarten. We learn all the basics, from teaching what a structure is, to how different materials go together.  We have our kindergarten through fifth-grade classes come to the lab every week for 40 minutes.

Once students reach middle school, we have Project Lead the Way in a class that they can choose as an elective. In sixth grade, I lead an intro to computer coding class. Our seventh and eighth graders have a more advanced coding class and a video production class.

This is our fifth year with the K-5 Project Lead the Way engineering program. My first group of kids was kindergarteners who are now fifth graders. We’ve seen great results throughout the process. 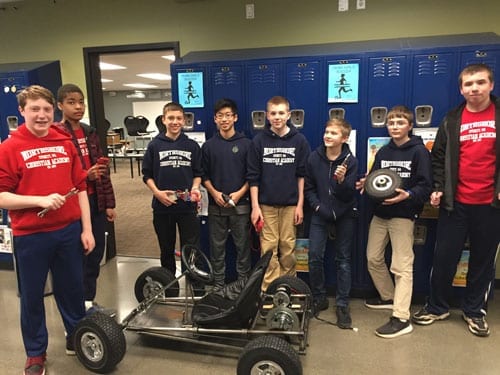 Have you noticed a difference between current fifth-graders who have gone through the entire program versus previous classes?

Oh, for sure. I just had a group of fifth-graders where half of them want to be engineers when they grow up. A lot of them come from engineering families, but the interest level has gone up so much. Through all the different units and modules that they’ve studied, I think their eyes have been opened to all the different possibilities in engineering.

What kind of coding do the students learn?

We start by learning Python. As the students learn, they play a game where they are actually writing the code. It walks them through the basics but allows them to learn how to type it and how to write the code out. Then when they move on. If they choose it in seventh grade and eighth grade, they do more advanced web page and game design.

We start our students on challenging math early to get a head start. We have the second-graders doing advanced third-grade math. We have fourth-graders in sixth-grade math. They just start at the bottom, building this really great foundation for the kids to be successful.

Do you have a lot of alumni who are in STEM careers?

I have only been here for 11 years, so the alumni that I really know well are still currently in college, but I would say around 70% of them are in engineering. It’s clearly pretty popular among NCA students.

How do you think students benefit from the local tech community?

We have a lot of Microsoft and Boeing families, and those families really invest in our school and our community, finding opportunities that maybe wouldn’t have been available to just anybody. They really bend over backward to make things awesome, not just for their own child, but for the community of children to experience great things.

Our robotics team has been in two Microsoft facilities and two with Boeing. They’ve been in rooms that they don’t just let any public people in, all through parent connections.

There are three award-winning robotics teams at NCA. How did they get started?

We had one parent who coached for five or six years who was really passionate about it because his son got into college on a great scholarship from his robotics background in high school. He really wanted his sons who were in elementary and junior high at the time to get an earlier jump on that education. He poured in hours of time into that program, not only with his own team but training other coaches, and they just took off.

The kids are so passionate about it, and it’s such a fun program. It’s an after-school job for them. They come in with engineering notebooks, and they take notes. They have homework. It is like a part-time job.

Those three award-winning teams are all middle school students, mixed sixth through eighth grade. We also have a fifth-grade team this year.

Then we also have junior Robogators teams, which are second through fourth grade. We have five of those this year, which is the highest number we’ve ever had, five different teams with six kids on each team. 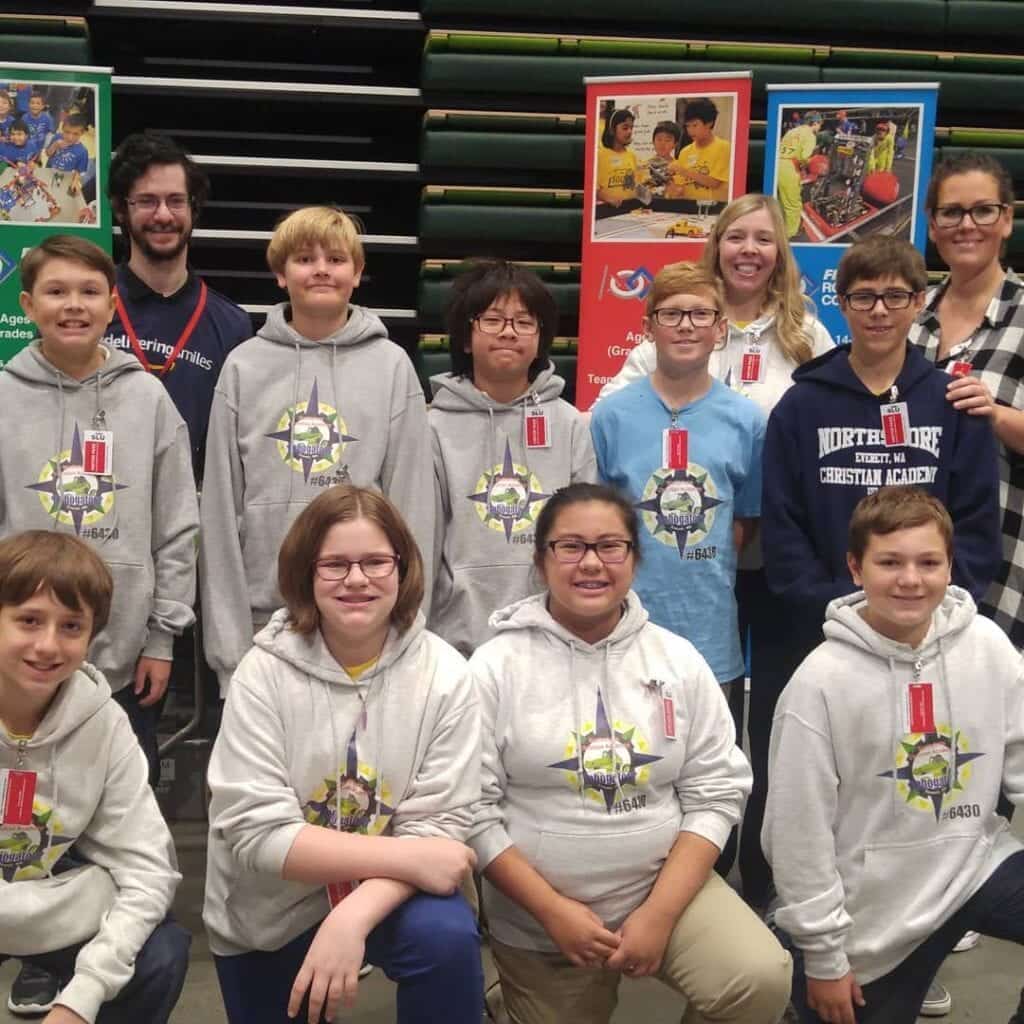 You have a whole classroom just dedicated to robotics, right?

Yes, we do! It’s our STEM room. It has all of the parts and pieces that we would need to build anything we need.

Project Lead the Way came with Vex kits, which is very similar to Lego. We use those in our third, fourth, and fifth grade Project Lead the Way classes, and that teaches them building. They learn simple machines all the way up to building a robot and learning how to code and program the robot. Then in middle school, they use the Legos for their teams.

What other kinds of STEM clubs and extracurricular opportunities do you offer?

We have an engineering club that built a go-kart from scratch, which was incredible. They have a 3D printer, so they just explore. They do a lot of coding. They do some of the next level stuff that the parents can guide. Then we have the robotics, and we also have an after-school Lego class.

What kinds of technology are students using in the classroom?

Northshore really does a good job of exposing them to different technology. We have iPads, we have PCs, we have two different kinds of Chromebooks. With me, they mostly use iPads. In the computer lab, they use PCs, and then in class, they’ll have Chromebooks. Every class has a Chromebook cart that they can use for additional learning opportunities.

What kinds of technology skills are they learning?

Kindergarteners struggle with not having a touch screen. That’s what they know, so learning a mouse is actually kind of new for them. So, we really focus in kindergarten on how to use the mouse and how to sit correctly at a computer as well as how to get on, click and double click onto different programs.

Our first graders and our second graders use a program called the MobyMax, which is tailored to them. They take a little starter test to figure out where they’re at and it works with them on their reading and their math and their science, and so they’ve worked through that in computer class.

Our third through fifth graders really focus on typing, and they do a number of Google projects, including creating a website that they work on throughout those three years. Third grade is all about typing and setting good habits. In fourth grade, they do the same for the first half a year, and in the second half of the year, they are creating a website and a presentation that they present to their parents on a different county in Washington state.

And then in fifth grade, they learn all of Google’s G Suite. We try to prepare them for middle school: how to write an email, how to access and save your different files, how to create folders within your drive and keep it organized. So, we’re trying to get them so that they’re prepared and they feel confident by the time they get to those. Our middle school has a one to one program, and so once they get over there, in each of their classes they’ll have a Chromebook that they use.

How do you teach digital citizenship?

That happens in our computer lab. We have a biblically-based digital citizenship program that we work through with the kids.

We use Protect Young Eyes, which is a safe spaced program. It incorporates a lot of the Christian principles into digital citizenship, why you shouldn’t do certain things and how it’s honoring to God to be a responsible digital citizen.

What kinds of guest speakers have you had recently?

We’ve had parents come in and share interesting things about what they do. Sometimes it’s just the dad’s here to help with our Watchdogs program, their class is here, and he’ll share what he does for Boeing and get the kids excited right away, make them think “Wow, that’s so cool.”

I have one mom who designs lighting for airplane bathrooms. I never would have thought that’s even a thing, but it’s so fascinating to hear her talk about what she does, and to hear parents be excited about their job. I mean, that gets the kids like, “That’s so cool.” And then to see your parent up there sharing with your class, they just become rockstars.

Boeing has a program called MECA, Make Engineering Cool Again. They came out a couple of years ago and they did a presentation on how airplanes work, and it was incredible.

To sum everything up, what would you say is the core approach to the STEM prgram at NCA?

I think that the heart and soul of a school is STEM. It’s so all-encompassing. I mean, it’s math, it’s reading, it’s art. It involves everything, and anybody can find something that excites them in STEM.

Part of my job is seeing what the kids’ God-given gifts are and what their natural interests are, and working with them to figure that out.